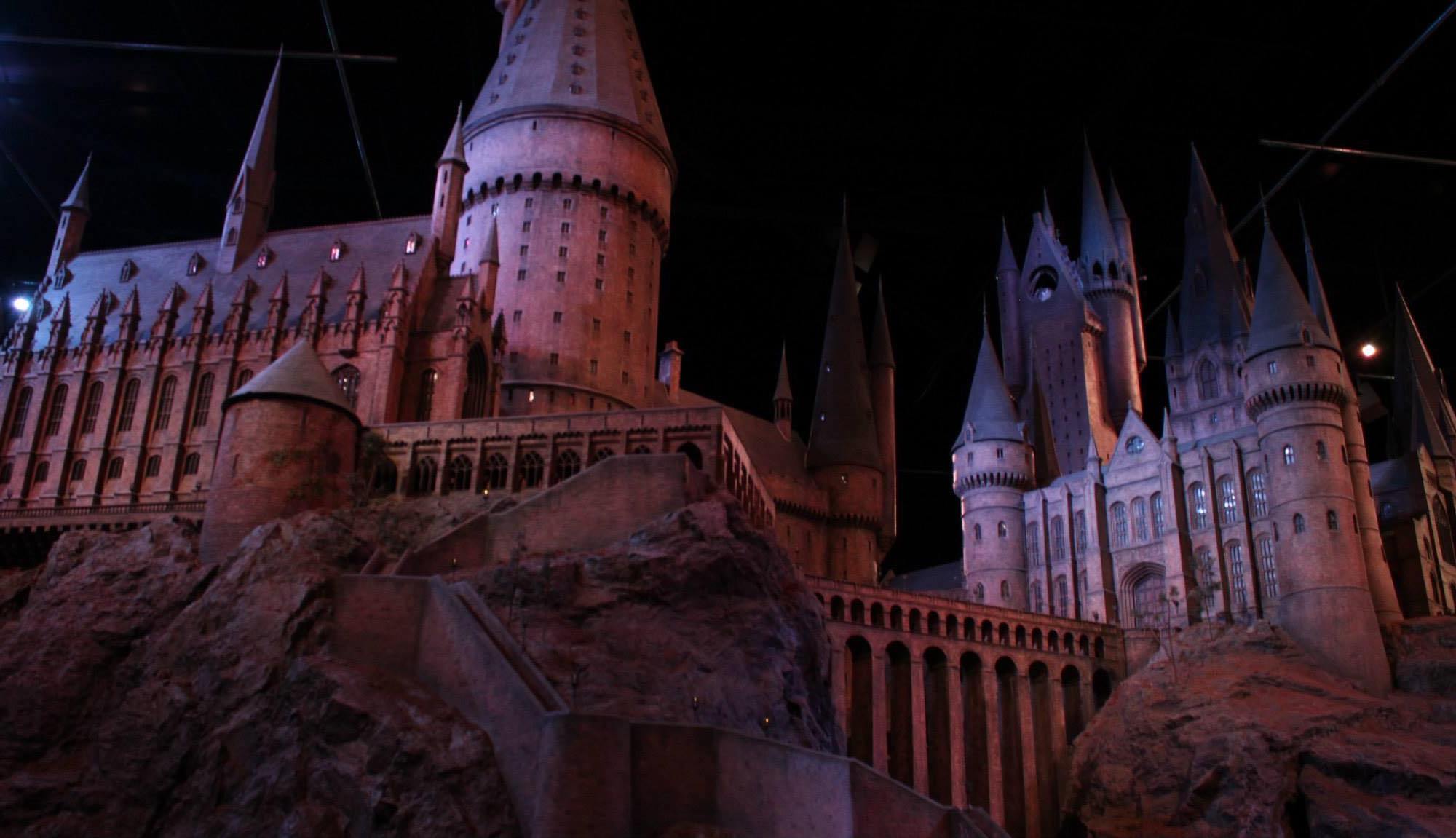 This blog is part of my “Elayna Ventures: London & Edinburgh 2015” Travel Journal

As my friend Claire so wonderfully put it when she posted the photo below:

Stuff Tiffany’s! Breakfast at Hogwarts is what it’s all about!”

After only about five hours of sleep in the span of two days, my friend Laura and I awoke trying our best not to pull a muscle from fangirling too hard, because we were about to have breakfast at Hogwarts. WHO ELSE DO YOU KNOW CAN SAY THAT?!?

Basically, over the years, we at MuggleNet have built some pretty great relationships with WB and the people behind the series. So naturally, when WB heard we were going to be rolling into London to host the biggest Harry Potter event in the UK for 2015 (#nbd) they apparently decided to do something nice for us. When our boss reached out to them about us coming to visit, they in turn offered for our staff to come in for a free tour/light breakfast. The conversation in which I discovered this excellent news is still rather priceless: 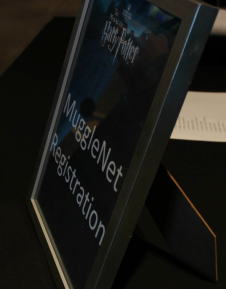 I spent the ensuing week and a half after learning this information trying to hold myself together and not have a spazz attack at the thought of MuggleNet getting its own tour, so that by the time the day came, I was quite the jittery mess of feels. Some of us teamed up and caught a taxi, and I must say that there’s nothing quite like the craziness of pulling up to the studios and seeing that big logo for The Making of Harry Potter. Once inside, we were greeted by the incredibly nice people who worked at the Studio Tour, and a little sign that read MuggleNet Registration. I must be honest, it felt like we were nerdy VIP’s or something. As we waited for the rest of our group to arrive, the girl leads us through this back area and in through a room chock full o’Olivanders wands, and then there it was . . .

The actual model of the actual Hogwarts that was used to film the series that I grew up with. I was standing before the very model that I first saw on screen at age 11. I was in the place of my dreams, the one place in the world that while fictional, has always felt more real to me than anywhere else. Hogwarts was actually there to welcome me home. Holding back tears was difficult.

Pictures were taken, DELICIOUS noms were enjoyed, and we got to mingle with some more of the really delightful people who work there. You could just tell how much they love working there and getting to live that #NerdLife every day. Their excitement was infectious, and I suppose they fed off our excitement as well. The energy surrounding Hogwarts was made of nothing but happiness, I tell ya. It was the perfect way to start the day.

Once all the croissants and coffee were consumed, and all of our staff had arrived, they led us back through to actually begin the tour. I began to feel that excited sort of anxious as members of staff kept saying to me “OH MY GOSH ELAYNA WAIT TILL YOU SEE HOW THEY START THE TOUR!!” and “YOU ARE GOING TO FREAK!” But all the while, no one had told me what exactly I was going to be freaking out over. As we walked away from Hogwarts I remember saying to someone, “You were right. Starting the morning off at the castle was great.” and they responded with, “That wasn’t what we meant! There’s something EVEN BETTER! Just wait and see.”

It took my mind a second to receive and process the idea that there was something better than mother effing Hogwarts.

We were ushered into a dark room, where soon a video began to play on the walls. The feels began immediately as the video showed footage from the filmmakers and cast about the experience of making the films. It brought back so, so, so many memories and I got a little teary eyed pretty quick. But once that was over, they ushered us into a cinema, where we watched yet another video, which made my case of the feels turn chronic. Here I am, at the Studio Tour, with MuggleNet friends, watching Dan, Rupert and Emma standing in front of the Great Hall on the screen, talking about the films that changed my life.

The video ends and then THE SCREEN GOES UP AND THE ACTUAL GREAT HALL DOORS ARE RIGHT THERE. I completely lost it.

By this point I’m already hysterical with happiness, and that’s why it took me several seconds to realize that the tour guide was saying, “Can I have Aimee and Elayna come on up please?” Its at this moment I FULLY realizes that the ‘better than Hogwarts moment’ was.

The staff had picked me as one of the people to come up and open the doors. There are no words I can type that can sum up what it felt like. I have never been so overwhelmed with joy. Everyone from staff was smiling, and here I am, sobbing like an idiot, because I can’t believe they would actually have picked me for this auspicious moment.

To make the experience even MORE special (like that’s even possible at that point) it bears being said that the scene in the first film, where McGonagall first walks them into the Great Hall was one of my favorite parts of the series, because every time I’d watch it, I’d remember how I first felt watching the first trailer, and the same sense of magic and wonder I felt when seeing it for the first time at the age of 11 would wash over me. So as I’m standing there, hand on the same freaking door handle that so many people from the films have touched, with the tour guide saying “Welcome to Hogwarts” was The. Single. Happiest. Moment. Of. My. Life. 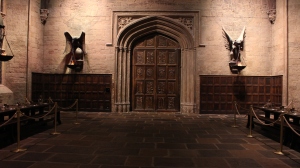 We walked into the Great Hall and the happy sobbing continued. MuggleNet staff reading this: you can never know how much that moment meant to me – to have had that chance to be there with you all and be the chosen one to open those doors. (God I am actually crying happy tears right now typing this, thanks for that) Everything about that day, from the hall to the Hogwarts Express, from all the props, costumes, effects, drawings and wands to the beautiful moment at the end of the tour where we came full circle back to the castle: it was 1000 times more perfect than anything I could have imagined for it still being my first 24 hours in London.

The rest of the day felt like a blurry mix of feels and excitement, for Expo Patronum was set to happen the very next morning. We spent the evening stuffing bags and getting registrations ready, and I discovered the craziest thing, which is that in the UK you can buy wine by the glass at a freaking train station. (#AmericanProbs) 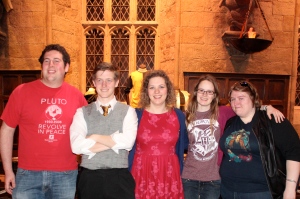 possible to feel in a single day. I grew closer with friends I’d already met from Leaky, and new ones that I’d only just met once arriving to the UK. But honestly, it was those people that made everything worth it. Seeing the Studio Tour was incredible beyond measure, yes, but to experience it with fellow people of MuggleNet, fellow fans who understand the feels, and amongst who there was no judgement whatsoever. Being with them, in that sacred nerdy space, made for the most magical day of my life.

One thought on “Breakfast at Hogwarts”