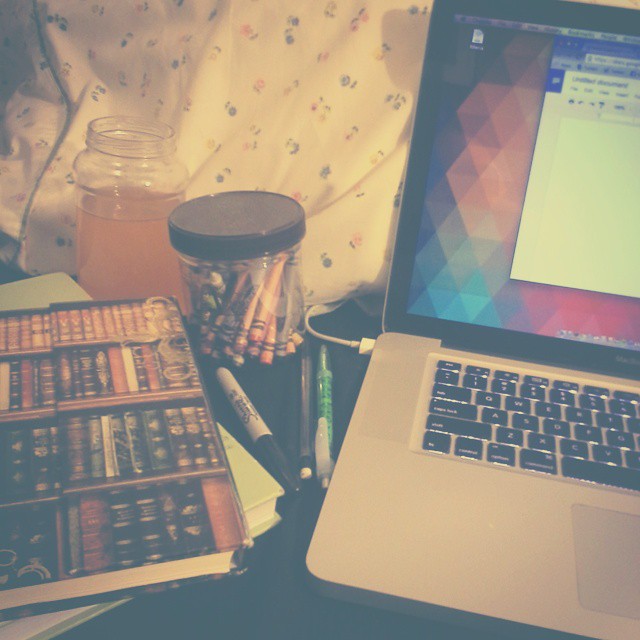 I’m rather upset with myself that not only did my writing fall behind, but my posting about writing did as well. I think at the start of the month, when I was hopeful about this new venture, I must have been expecting every day to be this creative, happy sunshine world in which I write and write about writing and make videos about writing about writing . . . that just didn’t end up being a thing. Honestly, it probably would have been perfectly doable were I not working a full time, 40 hour a week day job, but ya know, bills gotta get paid. I think the hope is that one day I won’t need that day job to take up so much of my time that could be spent creatively running off into the sunset with my characters, but it is not this day. This day is the day that marks six days until the end of Camp NaNoWriMo, which means I’ve got six days to write about 33,000 words. (All while also being at GeekyCon)

At a moment like this, I very well could throw in the towel on this month’s writing, give myself a gold star saying #YouTried and go into full on OMG I’M GOING TO GEEKYCON mode. But as fun and easy as that would be, it wouldn’t be fair to my story, or to myself. I set out to accomplish goals all the time, and then when I fall short, I feel like a total trash can who can’t do anything and that feeling is really no fun for anyone. I hate making promises I can’t keep, to myself and especially others, and I feel I’ve already gone back on my word enough by letting the blogging and vlogging fall by the way side this month.

So what can I do to not feel like a total fartbag? I can fucking do this. I can sit down over the next few days (even while at Geeky) and focus like a freaking laser on getting to 50K before August hits. I can stop scrolling through tumblr for a few days, stop trying to tweet so much about writing that I don’t actually write anything, and honestly, I can stop blogging about it. I need to just set down, with me, my notes and an open word processor, and let this happen. My best writing days tend to be the ones where I stop being so worried about creating a story and realize that the story already exists, I just haven’t put it to paper yet. At least for me, it helps sometimes to think of my stories as already done, as forgone conclusions that I’m merely transcribing to a page. Its my plan for this week, and hopefully it works.

I can’t make promises that I will absolutely reach my 50,000 word goal before the clock strikes midnight on August 1st, but I can promise this: I’m going to do everything within my power to make it happen, and I WILL NOT, UNDER ANY CIRCUMSTANCES give up. Here’s hoping I’ll be posting August 1st with a bunch of happy success gifs because I did what I really set out to do. Here’s to real word sprinting, typing like a maniac, and hopefully, to hitting 50K.