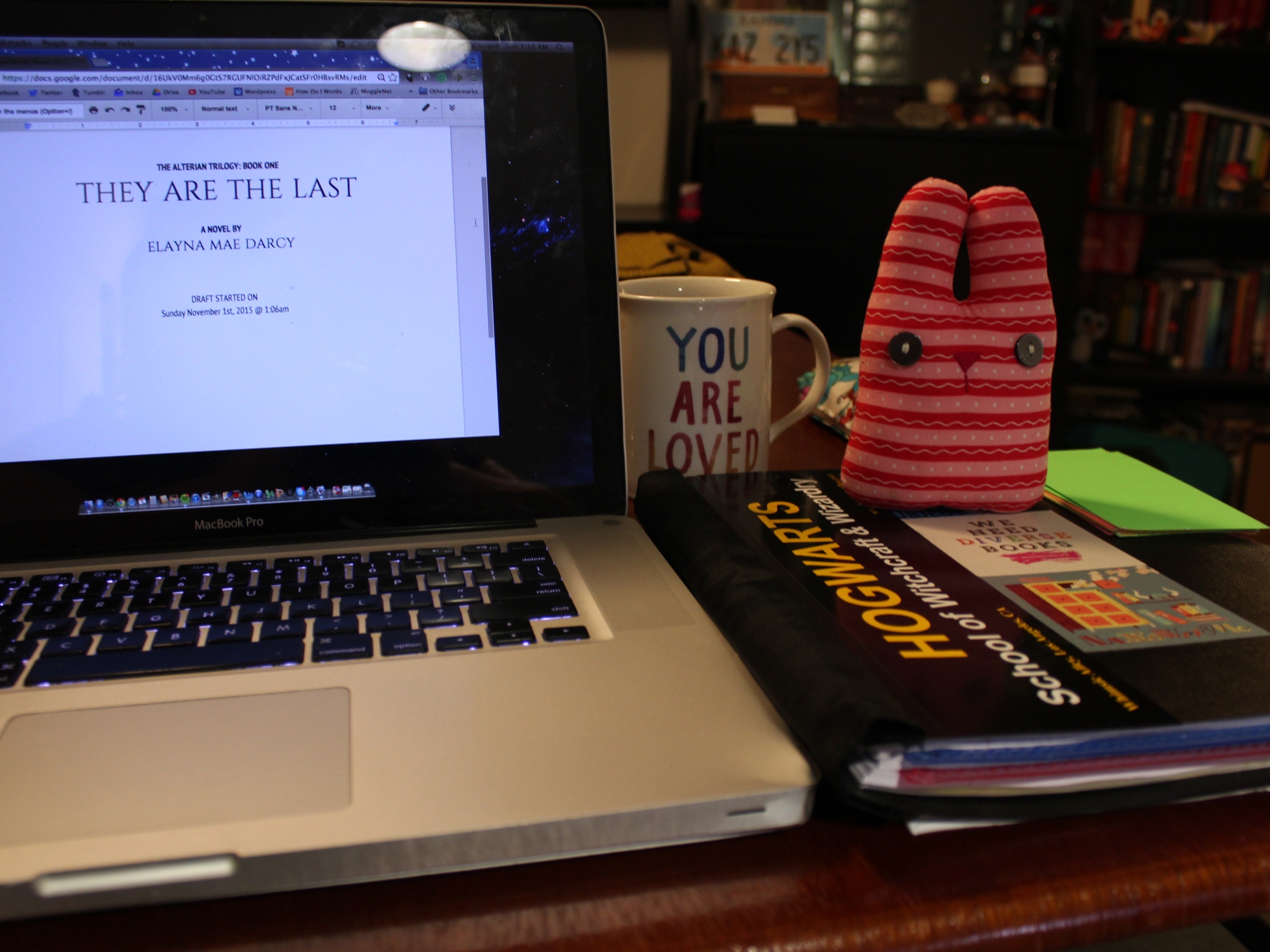 Today friends, on the auspicious occasion that is Day One of my 11th year doing NaNoWriMo, I present you with a relic of the internet: the following image is a screen grab from my recently discovered LiveJournal, which somehow survived and contains evidence of how I was feeling the night before my very first NaNo adventure . . .

Note the very 2004 music choice, the adorable 14 year old exclamations (hehe), the fact that I was Trick-or-Treating that night, and that I thought I was going to write a “masterpiece”.

It’s hard for me to believe that eleven years later, I’m still here. Still participating, still writing, and have now even become an ML for my region, something that little me could have only dreamed about. It’s all very surreal I assure you.

But why do I share this piece of personal NaNoHistory with you? *shuffles notecards* For several reasons really. For one, it’s hilarious. I mean come on? Did you look at it?

Secondly, it shows that I really have been blogging since the dawn of ever. I can actually feel confident in putting on a resume that I’ve been doing it for 11 years. (Though I never said I’d been a good blogger for 11 years.)

Most importantly however, I share it because of the particular story I am writing for this year’s NaNoWriMo. As you can see in the photo below, it is called They Are The Last and it is the first book in a trilogy that I plan to write, and which will hopefully become my first published work one day. This story, its characters, and its world – a place called Alteria – were all my very first novel idea. We’re talking – 13 years old, sitting in Math class, bored out of my brains because I sucked at Math (ah, how some things never change) and went, it would be so cool if I wrote a book about another world. I was transfixed by stories like Harry Potter, Lord of the Rings, The Pendragon Series (if you haven’t read that last one: LOOK IT UP) This idea was one I mulled over a little for the ensuing days, and then on February 9th, 2004, at 10:13 in the morning, I wrote on a piece of paper Alteria: The Adventure Begins along with the date and time.

The rest is history.

I worked on the story a lot in those early days, coming up with races for this fantasy world, a really evil bad guy, and the supporting characters around my main girl, Piper, who was very much the brave person I hoped to be. Interestingly enough, when I came up with her, I knew from those very first pages that Piper was going to be an orphan, even though at the time, both my parents were alive. Sadly in the ensuing years, I’ve lost both my parents, thus forcing me to connect with my character on levels I never could have anticipated then. I guess everything happens for a reason.

The years went by, and high school and college quickly ate my life. My NaNoWriMo novels went largely unfinished, as projects and essays and having to find a job became the order of the day. There was not enough time for creativity. There was not enough time for blogging. Alteria faded, and became nothing more than a very beloved idea that sat in a dusty box of old stories that maybe, just maybe, I’d finish telling one day.

Then came April 2015. Just a few months before, I had celebrated my first NaNoWriMo victory since I was 17! I was writing more than ever, working on a story with a friend of mine. But as time went on, it became clear that the story we were writing together was one he needed to develop more on his own before sharing it, and so I decided to get back to something of my own. So I went to London and Edinburgh, knowing that while there, I would have to decide what story I should tell. #MidLifeCrisis

The time I spent in Edinburgh is another blog post in itself, one perhaps I’ll write for you this November between noveling and regular blogging. But let’s just say, thanks to Edinburgh, I found Alteria again, and have been working on it full steam ahead ever since.

This November, I embark on my most epic journey yet: the quest to tell the story that’s been with me as long as I can remember. Equipped with knowledge of storytelling from my film degree, 11 years worth of sheer writing experience, and honestly surrounded by the most supportive group of people I’ve ever had in my life, I will be trying to tell Piper’s story the way it was always meant to be told.

I’d be lying if I said I wasn’t scared. This story is the biggest deal to me, and I know that the process to get it from my mind to a book shelf is going to be long, hard, and full of countless things I could never anticipate as I sit here typing this blog. But if 14 year old me and 25 year old me have anything in common, it’s this: we absolutely cannot wait for it.

6 thoughts on “The Adventure Begins”