My has it been a while.

In fact, this may be my longest break in blogging since March of last year if memory serves me. So in summary, this is what the heck I’ve been up to that has kept me away

Things in my life just seemed to escalate really quickly in the best possible way in July, and most of August has been me trying to just catch up with myself and register the honest to God miracles that popped into my life, like Too Many Controllers and my trip to Nerd-vana.

Never again do I hope to leave this much of a gap in my musings, mostly cause I enjoy sharing life experiences with you all. Hopefully now that everything has leveled a little once again, I can get back to telling you about the rad happenings as they’re happening. WHICH REMINDS ME.

What can I say? July did wonders for my creativity.

This weekend, I’ve proudly launched the first chapter of my first book I intend to be fully posted online through Wattpad, which for those not in the know is a site for writers to digitally share their work fo’ free. Never Again is something I’m tackling in this new way as opposed to seeking traditional book publishing of any kind first because it is essentially my first fanwork. I’m putting my own spin on one of my favorite heroes of all time – Peter Pan.

I don’t talk about my love of Peter Pan much, in the same way one doesn’t talk about having blood all the time. It’s just a thing you have that is part of you that never goes away. Peter Pan was my favorite movie as a 2 year old, and he was one of my most beloved heroes growing up, and in the back of my head, I’ve always wanted to write a story about him, his friends, and his adventures.

Thus Never Again. The story begins with a lonely, depressed, and homeless teenage Peter, who for reasons I won’t spoil, agreed to leave Neverland to save the lives of some pretty important people. Forced to grow up, he befriends the only people he understands—orphans and runaways. One of these runaways is a young girl named Acie, who reminds him in so many ways of the friends he left behind. Meanwhile, back in Neverland, Tiger Lily, Tink, and their mermaid friend are trying to break the curse and bring Peter back, because Neverland finds itself on the brink of destruction, and they believe he’s the one who can bring back hope and help save the day.

This story has been fermenting in my brain for a few months now, and inspiration struck only nights ago. I’m not setting specific days or times when the story will be uploaded, mostly because I want this to be a work that just gets to be. I want to write it freely when I feel so moved, and not ever be put forth under any kind of stress. It seems to me the happiest way to write, and I so look forward to sharing it with the world, as opposed to keeping so much of it under lock and key as I must with my stories which I seek to traditionally publish.

You can read the first chapter of the story here, and meet my versions of Peter, Tink, and Lily. I want this story to bring a classic into the modern world, and tell a new story about a character I love, in a story that’s sans all that early 20th century misogyny and racism. (The fact that Tiger Lily never talks and her people are disgusting caricatures of Native Americans has always made me sick.) If you’ve ever read anything else by me, you know how important representation in stories is to me, so I couldn’t be more psyched to get rid of the dated stereotypes of these characters, and flesh them out as complex, fully rounded human beings.

Tomorrow I venture to New York City, so look out for a post about that adventure! In the meantime, I leave you with the first few lines of Never Again as a sneak peak, but you can find the whole of Chapter One now on Wattpad! 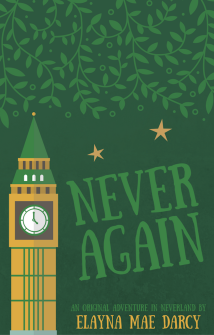 The boy stuck a cigarette between his teeth as Big Ben chimed twelve.

Tourists with their selfie sticks ambled about Westminster Bridge as they always did, no one paying any mind to the tall, thin boy leaning over the edge having a smoke. He was as common a site as there was in bustling, downtown London. To the average eye, just another cheeky teenager in torn up jeans and a hoodie with too many patches. Just another boy with too much tousled blonde hair and a grin that mothers told their daughters to watch out for. There was nothing on his person to indicate that he was in a world he didn’t belong in-a world he never felt he belonged in.

But the boy who was never to grow up finally had, and all it did was remind him why he’d never wanted to.

Click here to read the rest of Chapter One on Wattpad!